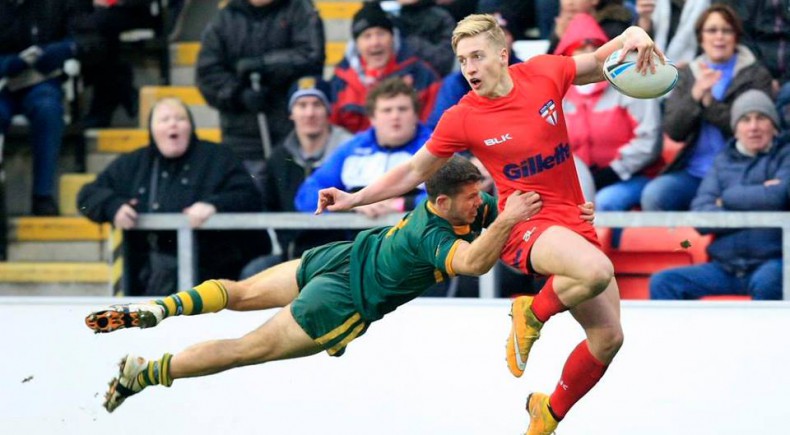 In a fiercely-fought and physical encounter, both sides recorded four tries, with a player from each team scoring a brace – Oliver Gildart crossed twice for the Academy whilst Latrell Mitchell grabbed two first-half scores for the Schoolboys – though it was the visitors, converting three tries to England’s one, who were ultimately victorious.

Coach Richard Marshall, taking charge of England Academy for the first time, spoke in the build-up to the game of the importance for his players to put in a strong defensive performance against a powerful Australian squad which had already racked up 160 points in three tour matches.

He got exactly that, as England stood firm for large periods of the match despite some forceful attacking by the Schoolboys.

“The speed of the Australians caught us a bit cold. That was our first hit out and they have had a few games prior to this match. That said, I thought defensively we were strong, we defended with some vigour and got stuck in. From a coaching point of view I was pleased with that.”

The schoolboys came out of the blocks aggressively and would have had the early score they were looking for through Mitchell had he not strayed into touch before crossing the line.

However, from their next attack, the visitors got what they were looking for. A neat move saw the Schoolboys work the ball left to Tevita Cottrell who, despite having a man available on the overlap, took on his marker and bundled his way over the whitewash.

They should have had another soon after when Ash Nisbet broke through the red-shirted England defence. He passed to Cottrell who again opted to take on his man despite the availability of an unmarked overlapping teammate, though this time England recovered.

After these early threats, England’s defence settled into a defensive solidity and were working their way into the match – looking dangerous 15 metres from the Schoolboys’ line – when Mitchell intercepted and showed immense speed and power to run in a near length-of-the-field try.

The Sydney City Roosters player scored his second right on half-time, using all of his strength to hold off numerous red shirts and stretch out an arm beyond the whitewash.

It followed what was England’s best spell of the match thus far – a dominant period spent deep in Australian territory which eventually saw Toby King, the Warrington Wolves centre, break through on the right flank, and offload to Oliver Davies to cross the line.

With the temperature hovering around freezing, England sparked into life early in the second half. Full-back Ash Golding saw a gap and scurried through the Schoolboys’ defence on halfway though 20 metres from the line, surrounded by backtracking green and gold shirts, his pass was intercepted.

However, just minutes later came a piece of luck to warm the hearts of the 1,583 fans inside the stadium as Gildart, from nothing, pounced on a loose ball inside the Australian ten to go over. It reawakened the aggressive Australians, who instantly looked to respond.

The tourists recorded their fourth try as Brock Lamb slid the ball through England’s defence for Tyrell Fuiaomano to acrobatically touch down, though England were not to surrender – from a penalty deep in Australian territory, stand-off Jordan Abdul saw a gap to power through for England’s third try of the afternoon.

It marked a period of dominance for England as through consecutive sets the Academy camped themselves ten metres from Australia’s line.

The pressure eventually told as Gildart went over for his second of the night, England’s fourth, and despite England’s change kicker Abdul converting for the first time with the game’s last kick, the Academy’s second-half fight-back fell short.

“We need to get a bit smarter with ball in hand, to build a little bit more pressure, and if we put the game to Australia then the second Test will be a little bit different.”