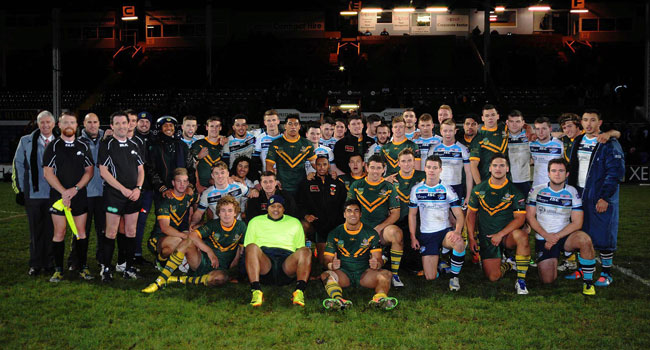 In a memorable night at Headingley Carnegie the Rhinos U19 Academy took on the touring Australian Schoolboys side in their final game of the season.

Prior to the meeting the young Australian side had defeated England Combined Regional Academies and Wigan Warriors and the Rhinos were hoping to end that winning run and become the first club team to beat the side.

The Australians looked to make an impact from the start but the Rhinos, who were captained by Robbie Ward, defended well in the opening five minutes and did enough to keep their opponents from scoring. Leeds then almost got the first try of the game as the ball was spread out wide to Ashton Golding who showed no fear in taking on the visitors defence as he powered through but was just held up short of the line.

The visitors broke the deadlock on ten minutes when Ray Stone escaped his tackler and offloaded to Jacob Liddle who had the easy job of running clear under the posts. Connor Tracey converted and following this they Australians kicked on and enjoyed a dominant ten minutes spell as they ran in three more tries to race out 22-0 in front. First John Olive collected a high kick and then evaded the chasing defender to get over in the corner. Keenan Yorston then made a break and sent Olive away on the wing before he cut a pass back inside to Yorston who completed the good attacking piece of play with a try. Gideon Gela then increased the score when he showed his face to sprint clear from the half way line and Tracey converted to give his team a strong lead.

After half an hour played the Rhinos showed their character to turn the one way tide and were able to force their opponents to make some errors, but they were unable to make the most of their chances.

Both teams were reduced to twelve men when tempers boiled over late in the first half which led to yellow cards for Elliot Minchella and Tyrell Fuiamaono. Soon after though the Rhinos grabbed their first try of the game after Jordan Lilley’s high kick was knocked down to Ashton Golding and the full back raced over next to the posts. Lilley added the conversion to bring the score to 6-22.

The Australians responded immediately to end the half on a high when Try Dragan spotted a gap in the Leeds defence and cut through before offloading to Nat Butcher who was able to go over unopposed. Once again Tracey converted to stretch his side’s lead to 28-6.

The Rhinos made a positive start to the second period when Ben Frankland collected a great pass from Rob Mulhern and Lilley converted to bring his side back in the game at 12-28.

The impressive Lilley then sent Tommy Brierley over for another try and then converted to bring the Rhinos closer at 18-28. The Rhinos continued to press for another opening and came close but a forward pass denied Chris Plume’s side.

The Australian Schoolboys made the Rhinos pay for this lost chance when Jayden Brailey sent Latrell Mitchell over for a try despite the desperate attempts from the Rhinos defence to halt the Australian, Ash Nisbet stretched the lead further when he collected the ball from Jacob Liddle and then had the simple job of running in for the try. With time running out the Rhinos were able to claim a deserved try when good work from Frankland and Thomas Minns set up Josh Walters and Lilley converted to bring the final score to 24-38.