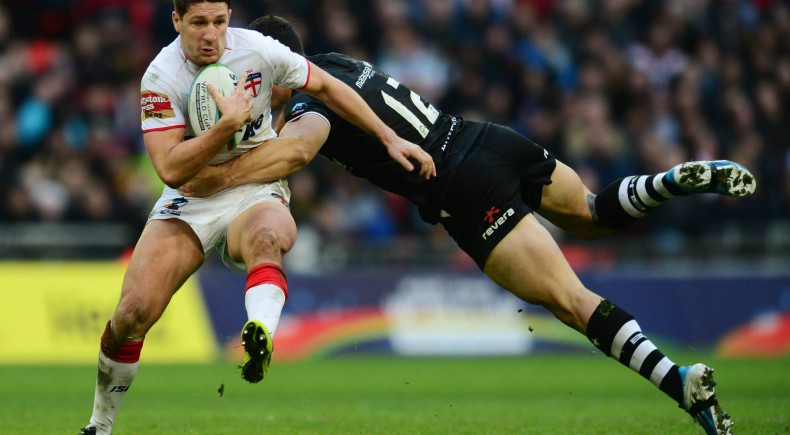 The Edinburgh of the South Dunners will be the historic backdrop of the first of this year’s virtual Four Nations semi-final between New Zealand and England.

Situated in the south island town of Dunedin in New Zealand, Forsyth Barr Stadium will host its first ever rugby league Test as the rugby league calendar draws to a close.

Victory for the Kiwis will ensure a direct path through to next week’s final in their backyard of Wellington, while their northern hemisphere counterparts will need a win of at least 10 points or more to secure the same result.

A loss doesn’t entirely spell an early trip home, either. Depending on the outcome of the Australia-Samoa clash on Sunday, it wouldn’t be impossible to see a rematch of this fixture next Saturday night.

In any case, it would be impractical for either nation to be carrying their calculators onto the field on Saturday given the ridiculously tight nature of the campaign thus far.

England were within Ryan Hall’s fingernail of nailing their ticket to Wellington when they suffered an unlucky defeat to the Kangaroos in Melbourne last Sunday – although some might say that after giving up a 12-4 lead with 23 minutes remaining, their Four Nations hopes deserve to be hanging on a knife’s edge. In the end they were the wrong end of an inauspicious 16-12 scoreline.

It will be intriguing to see how they will have mentally recovered from such a deflating defeat, particularly given coach Steve McNamara has named an unchanged line-up this week.

At the other end of rugby league’s emotional spectrum sit New Zealand, who must still be thanking their lucky stars after surviving a 14-12 fright against Samoa in Whangarei last Saturday afternoon.

They too were staring at a 12-6 faceplant heading into the final quarter against the tournament underdogs when late tries to Jason Nightingale and Shaun Kenny-Dowall kept them from wiping the eggs off their faces.

Coach Stephen Kearney has recalled the services of utility Thomas Leuluai in place of the adaptable Lewis Brown on the bench, while Greg Eastwood has also replaced benchman Suaia Matagi.

Having endured the stressful events of last week, the third and final round of group match-ups promises to bring another weekend of headaches for those of us who are mathematically challenged.

This much we know – two teams will be left standing in the Four Nations on Sunday night. Let the games begin.

Watch Out New Zealand: Not that any of you needed any reminding, but the blonde-haired wingman on the left flank that goes by the name Ryan Hall isn’t too shabby a player. He backed up his tournament-opening 118-metre performance with a 130-metre outing against the Kangaroos, together with his first try. The Leeds veteran opened the Australians up three times and leads the Poms with 12 tackle busts.

Watch Out England: Anyone who has watched Jason Taumalolo in 2014 knows that the notoriously shy back-rower has grown from manchild to man in the space of three months. For years the rugby league community has been waiting for the prodigious talent to shatter oppositions on a weekly basis. Consider the waiting done. His rampaging 131-metre and 155-metre outputs over the past fortnight confirm what many were thinking when he moved from Mangere to Townsville a decade ago – Taumalolo is a bona fide star.

Plays To Watch: Both nations found plenty of success taking advantage of inexperienced defensive combinations down the fringes of their respective counterparts last week. England pivot Gareth Widdop was the key man for the northern hemisphere side, providing excellent depth, particularly on a left side shift. Similarly, the Kiwis looked comfortable when attacking in Shaun Johnson’s half of the field, where he links up with Warriors clubmates Simon Mannering and Manu Vatuvei.

Where It Will Be Won: On England’s ability to shut down New Zealand desire to have fun. Kearney’s side have easily been the most carefree country in the tournament, offloading almost twice the amount of times than any other nation. The chief offloader has been frontman Jesse Bromwich, who leads the team with eight. Should his eagerness to initiate second-phase play continue, the likes of Johnson and Kieran Foran will wreak havoc on both sides of the ruck and through the middle.

The History: Played 9; New Zealand 5, England 3, Drawn 1. Oh the memories. Many good judges on both sides of the equator labelled last year’s World Cup semi-final between these two countries as one of the greatest rugby league games in its history. With the famed Wembley Stadium as the backdrop, New Zealand and England put on a 20-18 epic, with Shaun Johnson crossing on the siren to secure a famous win. The two nations have split their past four.