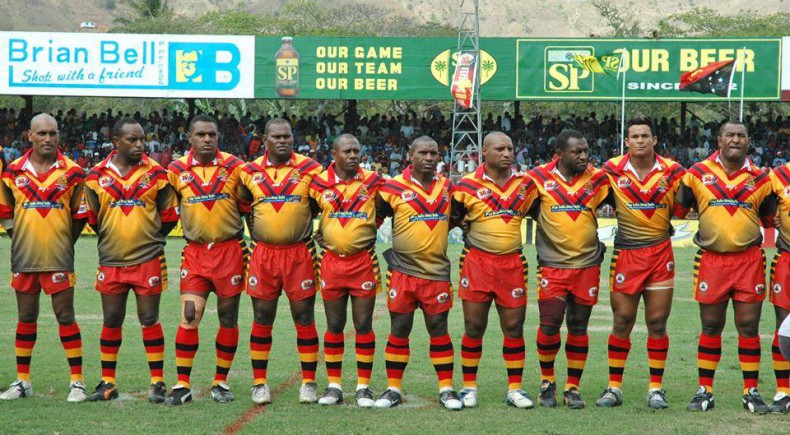 An additional two players have been added to the PNG PM13 squad for the upcoming match against the PM13 Kangaroos in Kokopo.

The inclusions have been brought in to replace Wellington Albert and Luke Page who are unavailable for the PM13 and Tonga Tests.
Albert who underwent surgery on a shoulder injury midway through the 2014 season was hopeful of being cleared to play, however after consulting with his specialist on Tuesday was officially ruled out. He is currently undergoing rehabilitation and his shoulder is not yet fully recovered in time to play in both matches, much to his disappointment.

Page has had considerable pressure placed on him by his NRL Club the Canberra Raiders to be in full training for the off-season in preparation for his first year with the Raiders in 2015 and while wanting to play has had to reconsider after discussions with his NRL club.

The two players added to the squad include Kato Otio, a 20 year old, 6’4”, 110kg centre who was a stand out at the recent National Championships and Prop forward Henry Wan from the Snax Tigers. Both will join the squad in camp in Kokopo immediately.

Head Coach Mal Meninga said while disappointing for both players it now opens the door for two other young players to come into camp;

“We named a larger squad than normal in case we had any situations such as this or any injuries leading up to the PM13 match. Its unfortunate Luke is unable to play and when its not a World Cup year NRL clubs do place a lot of pressure, particularly on their fringe or young players to rest in the off season and not risk injury. Wellington was very upset but he has to follow his specialist’s advice and we certainly don’t want him reinjuring his shoulder and placing his 2015 season in jeopardy. It’s an important year for him in the Panthers Top 25 player list and we want him to have a big year.”
        
Meninga said the two players added will benefit enormously from being in camp with the squad and it’s an opportunity for the coaches to assess their attitude, fitness and discipline;

“After consulting with Michael in particular and the National Selectors we decided to bring in Kato and Henry. Michael was particularly impressed with Kato at the National Championships where he dominated. His sheer size, youth, attitude and athleticism are the attributes we are looking for in building a strong squad for 2017. It’s a big step up for him but we want to encourage the potential he has. Henry has been on the radar all year and has been watched closely by Michael and the national selectors. He is a good size, still young and very mobile for a prop forward so we are also keen for him to come into camp and see how he performs. Both players are young, have the attributes we are looking and will be at their peak in 2017.”

“Kato and Henry will still play in the All Stars curtain raiser if not in the run on side for the PM13, however they will most likely be rested in the second half and sit on the bench for the main game so we can give them a look at that level. This may also apply to any other players who stand out in the All Stars.

Meninga also pointed out the following in regards to selections;

“We have to look at realistically what we want to achieve and where we want to be in 3 years time. Do we pick and focus on players with youth and ability and build a side for 2017 or do we pick players who won’t be around for the next World Cup and take a potluck when 2017 comes around? Obviously we want to build a side and have concentrated on youth, attitude, talent and the type of players we want to represent the Nation. Its a similar process we went through with the QLD origin side where we went with a group of young guys, worked on youth development and we went on to win 8 out of the last 9 Origin series. There are a lot of similarities here and with the group of players also coming through the Development program who won the recent Commonwealth Championships we have a wealth of young talent ready to take that next step up over the next couple of years.”